Forecasting weather may be the ultimate game of predicting the unpredictable. And as renewable energy gains popularity, weather prediction has become a mission-critical activity for solar and wind energy providers, who need to know how much power they can expect to generate each day or hour.

Luckily, Ilias Pliotas has his game face on. In May 2021, he was promoted to a new role as the Head of R&D at ConWX, a Volaris-owned company that supplies weather data to help wind and solar farms forecast their power production. (Like many Volaris companies, ConWX has deep expertise in its vertical market. The company is helmed by a co-founder and CEO with credentials from Denmark’s official weather service.)

Thanks in part to his new role, Pliotas is well-positioned to help his company and clients win. Pliotas spoke to Acquired Knowledge magazine at the ConWX head office in Copenhagen. 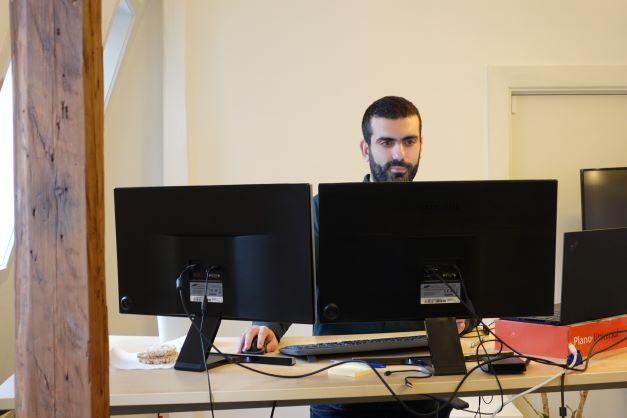 After ConWX was acquired, Pliotas was promoted to Head of R&D.
The new role has given him a greater ability to contribute to the future growth of the business.

What was your career story at ConWX before the company joined Volaris?

I had been a wind energy analyst at the company for nearly three and a half years before ConWX joined Volaris. My role involved data analysis and developing methods for forecasting renewable power generation.

That role was similar in many respects to what I do now, but before the acquisition, I was looking at data mostly from a client perspective. Since ConWX is a small company, I did a lot of work not only in R&D but also in the areas of customer care and professional services.

How did your role at ConWX change after being acquired by Volaris?

After joining Volaris in February 2021, we came to understand the importance of having a dedicated R&D team and resources. After much discussion, I was promoted to my current role and have been leading the R&D team since May 2021. Since ConWX remains a customer-oriented business, I continue to take a role in managing customer relationships.

After being promoted to my new role, I now oversee the design of new product roadmaps—integrating them with our sales strategy and researching emerging technologies in our market. I set project goals and priorities for the team and ensure our product meets high technical standards.

Developing talent is a big part of the Volaris culture. Can you tell us about the R&D talent you manage at ConWX?

Currently, there are four people in the R&D department including myself. The team is made up of wind energy engineers who work with data science modeling. We also have a meteorologist in the department. Together, we dedicate our time to understanding weather and wind patterns.

As a department head, I contribute to the growth of our employees by coaching team members in the R&D department. I’ve taken a leadership role in hiring, onboarding new employees, and career planning and development.

"We are more focused on product improvements now... My new role puts me in a better position to contribute, including exploring new ideas and technologies."

How does ConWX benefit from your newly enhanced ability to focus on R&D?

We are more focused on product improvements now. After working with Volaris, we have identified key products that we can focus our resources on to make them best in class.

My new role puts me in a better position to contribute, including exploring new ideas and technologies. We are a very scientific company, so we don’t make business decisions arbitrarily. We do our research and look at the literature, and we look at the market data in our industry. I’ve been given the chance to do that in a more efficient way now.

You participated in an event for business and functional leaders, Volaris 101. What were your takeaways?

For me, the most important takeaway from Volaris 101 was the importance of measuring our business processes, such as how much time we spend with each customer. Since I am a data person, I like that we’ve joined a company with research behind its business decisions. There is thought behind our KPIs.

As part of Volaris, we now have a network of global colleagues. I enjoy speaking to other people in the software industry, especially others who use similar technology or data.

"Since I am a data person, I like that we’ve joined a company with research behind its business decisions. There is thought behind our KPIs."

What advice would you give to any companies that have recently been acquired by Volaris?

When the acquisition was announced, it took me some time to get my head around it, to be honest. As human beings, we tend to dislike change, but it seems in our case that this change is good for us so far. We all want to grow our companies, and ultimately, it’s to our benefit as employees to grow them.

I would advise any new people to Volaris to have patience during the onboarding process and to trust your leaders who hold the data.

This is an important point – trusting in the data to help guide future business decisions. When it was time for us to make a major decision, Volaris was there to guide us with a big dataset with many years of software customer data collected. I’m a believer in the power of data, and I can’t argue with that approach.