Generative AI is capturing attention for making major leaps in what it can do. Could the latest AI advancements be applied to your business?

You may have heard friends or colleagues talking about ChatGPT, the chatbot going viral for being able to hold text-based conversations in a lifelike manner. The application is an example of the latest artificial intelligence advancements steadily building mainstream buzz.

For the previously uninitiated, the latest AI technologies showcase the relatively rapid progress made in the field over the past several years. Many people who have spent time with the latest tools remark that the machine-generated language convincingly reads as if written by a human, which wasn’t the case just five years ago.

The technology could hold opportunities and implications for businesses.

The quality of the responses that can now be provided by an AI system to questions and instructions was impossible just a few years ago.

Naturally, the growing capabilities of AI may also raise concerns about ethics and intellectual property. But assuming these concerns can be addressed with time, one can’t help but wonder whether forward-thinking businesses can use AI to help manage repetitive tasks. After all, businesses are already using technology to free employees' time and allow a greater focus on high-value work. They are already embracing automation and AI in the form of chatbots, predictive analytics, and robotic process automation (RPA).

At a 2022 Volaris conference, some participants brainstormed and experimented with use cases, many of which were starting points for a variety of tasks:

AI has come a long way

Driving the buzz in recent years is OpenAI, the research company that has developed a powerful language model, GPT-3. This model provides the underlying structure for ChatGPT and other applications.

Understanding how a language model like GPT-3 was developed can provide context for its possible uses and limitations. As the largest publicly available neural network machine learning model ever produced, GPT-3 is designed to predict what text is likely to follow any given prompt by drawing on its extensive training by researchers. The GPT-3 model can predict responses from being fed a massive dataset run through 175 billion parameters and containing more than 45 terabytes of text, including from Wikipedia, books, and scientific papers. (A key part of the architecture used in GPT-3 is the transformer model, which represented a major step forward and was first written about in 2017[i].)

Another reason to pay attention to the world of AI? It has become easier than ever for anyone to access and experiment with AI tools such as GPT-3. To generate text in GPT-3, for example, the user inputs a prompt in a publicly accessible the AI tool uses its training to quickly generate a relevant response. GPT-3 can also summarize texts and answer questions.

“The quality of the responses that can now be provided by an AI system to questions and instructions was impossible just a few years ago,” says John Crook, a Group Leader at Volaris Group who has been following the latest progress. “If you’ve considered using AI in your business previously, but thought it too difficult, too expensive, or too flaky, I’d suggest you look again.”

If you are looking to learn about the latest capabilities of AI, Crook has assembled a guide below to help business leaders get started and navigate the AI learning curve using GPT-3.

The GPT-3 Playground is an online tool where you can enter text, press submit, and see GPT-3’s response.  You can structure the text you provide (called a prompt) to deliver useful outputs.

To get started with GPT-3, go to the OpenAI signup page and create a free account. Login, then navigate to the Playground App. Type in or paste your prompt and press enter to create a new line, then click “Submit.”  The default settings are fine to start experimenting with.

Let’s see some examples that showcase the abilities of GPT-3, as well as some of its limitations. These demonstrations may inspire ideas that you can use in your business today.

Example 1A: Improve the wording in a contract

Example 1 shows how to improve the wording in a contract.  The green-shaded text is GPT-3’s response to the text instructions (prompt) that you have entered. (Editor’s note: We are not suggesting that you should use GPT-3’s response in place of your existing legal review process.  However, you may treat GPT-3 as a virtual assistant of sorts that can suggest outputs for consideration.)

Rewrite the following paragraph suitable for a legal contract that reduces the risk for LinkSoft:

LinkSoft will use commercial best efforts to provide customers with 99.99% uptime. This does not include periods scheduled for upgrades and maintenance. Downtime is measured from the time an unscheduled service interruption is reported by the Customer.

Notwithstanding anything to the contrary in this Agreement, Linksoft shall use commercially reasonable efforts to provide the Services with a 99.99% uptime rate (“Service Level”), excluding (i) periods during which the Services are unavailable while scheduled for upgrades and maintenance, or (ii) any unavailability caused by factors beyond Linksoft’s reasonable control, such as, for example, natural disasters, acts of war or terrorism, riots, civil disturbances, interruptions in telecommunications or Internet service provider services or equipment failures. Downtime shall be measured from the time an unscheduled service interruption is reported by the Customer.

Example 1B: Examining the results

Notice how the AI tool has, among other changes:

Once again, it is very important to remember that you shouldn’t simply use GPT-3’s response as is, since this is not a substitute for your legal review process. Its output should merely be seen as a suggestion to consider.

After running these results several times, you may notice that you will not always get the same result. Sometimes it will surprise you. For example, one time it changed 99.99% to 99.9%, and another time it removed any specific measure of uptime at all. If you don’t like its response, it is quick and easy to try again to get a different result. Bear in mind that like any online service, your text is sent to the supplier’s servers, so it is not advisable to use confidential data.

Example 2A: Write an Excel macro

GPT-3 can help with writing code, including in Excel.  Imagine you have a spreadsheet with hundreds of identically structured tabs, where cell W44 on each tab shows the EBITA for the business/group on that tab.  You’d like to collect all the EBITAs into one column and place them on the first sheet, but you’re not sure how.  Try the following prompt in GPT-3:

Write an Excel macro to loop through all tabs in an Excel spreadsheet, and copy the contents of cell W44 from each tab to column A on the first worksheet.

For Each ws In ActiveWorkbook.Worksheets

Example 2B: Examining the results

Copy the code produced by GPT-3, paste it into an Excel macro and see if it performs as required. It’s not always 100% correct on syntax, so if the first version it produces does not compile, it may be worth another attempt.

Although GPT-3 was not specifically built to write code, the GPT-3 designers were stunned it could become capable of doing so. The GPT-3 model has processed enough code to learn what is likely to be the correct solution following the code comment in the prompt above.

This final example is not directly business-related, but it’s designed to show how well GPT-3 can deal with complexity, context, and nuances. The prompt in Example 3 starts off apparently talking about creatures or animals seen by the narrator, and the description of the creatures is concluded much later in the final sentence. In between, there are several sentences talking about the weather and using plenty of animal nouns to try and confuse the situation.

Do you think that GPT-3 can come up with six correct answers to the questions in the prompt below?

I think I saw at least a dozen emerge, no, maybe more than three times that.  The moon was shining brightly, there was a strong wind which was producing lots of white horses in the sea.  The fronds were casting shadows that danced around like a cat on a hot tin roof.  Visibility was poor as it was pelting cats and dogs. They were on a life or death journey from their sandy birthplace to the sea.

1. What animals did the narrator see?

3. What trees were described?

5. What was meant by pelting cats and dogs?

6. What caused the shadows to move around?

What’s next for AI and your business?

To illustrate how quickly AI could advance, the computing power available for AI is already 7.3 million times what was available 10 years ago. And GPT-3 is not the only AI model making major advancements. Other models produce images instead of text–for example, DALL-E-2[ii] and Stable Diffusion[iii]. As of 2022, the amount of AI effective computing power available is estimated to be doubling every 5.7 months[iv].

With AI changing at a phenomenally rapid pace, someone in your leadership team might consider keeping an eye on the latest advancements to assess potential business uses. If you were not yet thinking about what AI and machine learning might be able to do for your business, this article was meant to inspire ideas. 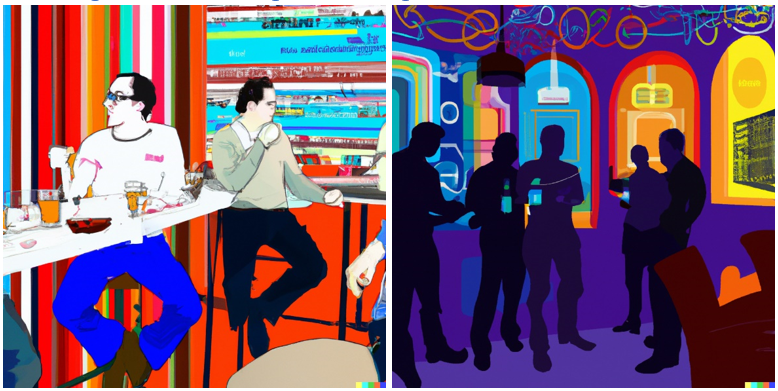 About the contributor: The examples demonstrated in this article and several citations were contributed by John Crook, a Group Leader at Volaris. They are based on his moderation work at Quadrants 2022, an event where we encourage leaders to share their expertise on best practices and emerging trends.

Crook is known among colleagues at Volaris as a creative leader with a commercial sensibility. A perpetual learner, his interests in AI and machine learning have deepened in recent years and he keeps up with courses from top global institutions advancing the field. Crook’s leadership is informed by decades of software development experience. While at Intel, several of his innovations were awarded patents by the U.S. Patent and Trademark Office. In addition to sharing his AI knowledge at Quadrants, he also presented on the topics of customer contract best practices, employee wellness, and history lessons from the technology sector.

Read more about automation from Volaris: