Occam Systems: How a "Leap of Faith" Led to A Lot of Growth

As Occam Systems Ltd approached its 20-year anniversary, Co-founder David Wilkes found himself thinking a lot about the future. For the prior two decades, Occam and Volaris-owned Kinetic Solutions Ltd had gone head-to-head in the UK, both delivering solutions to help Universities manage student accommodations and events.

Occam was in a stable, comfortable place. It was not growing but it was not going backward either. As David wondered what would advance the UK market and how Occam could re-start growth, he decided he “needed to do something dramatically different to change the status quo, to afford to take risks and to build new product.” He began to consider strategic acquisition as a route to growth.

Through what David refers to as a “leap of faith,” in March 2018 Occam Systems joined Volaris-owned Kinetic. The two companies, now one, continue to thrive today.

Taking a Leap of Faith

When David reflects on the days leading up to the acquisition, he remembers asking Kinetic CEO, Rob Turner and Volaris M&A Director, Lawrence Rosedale some difficult questions. And he remembers their answers. He remembers their commitment to protecting what they were buying, to not just stripping the assets out of Occam but to leveraging everything that was great about it - its leaders, team members, customers, and technology. For David, that was the start of the journey and when he really started to believe it was all possible.

"There's always a degree of unknown, a leap of faith required. You can never predict the future. You put trust in the people that you're dealing with, in what they're promising you. They could promise the Earth but in this case, they were truthful. I think you can say it's been a surprisingly happy outcome." 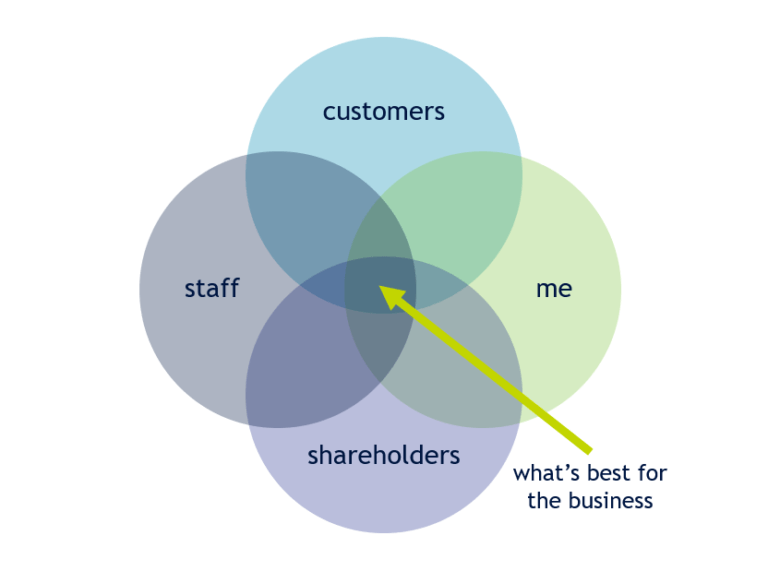 When evaluating his options for acquisition, David determined that what’s best for the business would be what lies at the intersection of what’s best for its customers, staff, shareholders, and founders. He outlined the specifics:

At the time of the sale, Occam’s shareholders received a return on their investment and the rest of David’s requirements were on their way to being realized.

Prior to joining Volaris-owned Kinetic, Occam’s team maintained a small, family-like atmosphere. While this was mostly positive, for David, the downside was not being able to provide many new opportunities to his team. He noted that moving people around often created holes in other areas of the business and with such a small organization, there weren’t a lot of opportunities to move people upward. For employees who were hungry for personal growth, this presented a challenge. David worried that without new opportunities, he could lose some of his most talented team members.

Today, more than three years post-acquisition, Occam has managed to retain all of its top performers. As part of Kinetic, they’ve been continually challenged and clearly see the opportunities for personal growth. All of Occam’s team are now part of larger teams within the Kinetic organization. Several have taken on new roles with the wider organization with new responsibilities.

“The retention has been great. The fact that they’ve all been continually challenged, take advantage of the opportunities for personal growth, and enjoy the culture, has kept them around.”

New Opportunities in Leadership and Strategy for Occam's Founder

While the Occam team has continued to grow within the Kinetic organization, David has also had the opportunity to take on new challenges. Shortly after the acquisition, Kinetic CEO, Rob Turner asked David if he would lead Kinetic’s professional services and customer care teams. This proved to be a great opportunity to work across the organization and to help with talent development.

As Kinetic promoted Danielle Weston to the role of VP of Client Services, David was off to tackle his next challenge. Now the Chief Products Officer at Kinetic, David is focused on R&D, product management, and helping accelerate growth for the company. In this role, David has had the opportunity to return to his roots in product design, building a design team and reimagining the role of the product and R&D teams in providing exceptional solutions to customers. He’s helped bring new solutions to Kinetic’s current customers and will be integral as the team considers geographic expansion.

“I used to spend Fridays doing accounts payable, accounts receivable, reconciling bank statements. Once a month I would spend all day on my P&L, balance sheet and cash flows forecasts. I’ve offloaded of all that, retaining oversight of what I need in my role. I’ve also stepped back from sales and marketing; we now have sales and marketing resources that we didn’t have before and an entire HR team. The extra support has been great and really frees me up to take on more of the strategic planning I enjoy doing.”

What allows David to dig in and tackle these new challenges? Well, part of it is having a larger team which has enabled him to concentrate more on strategy while relying on others to lead the execution. It has also meant that he doesn’t have to wear as many hats. Resources for finance, HR, legal, sales and marketing have all allowed David to spend more time focusing on Kinetic’s employees, customers and solutions.

In the three years since becoming part of Kinetic, Occam’s customers have seen the solution evolve to better meet their needs and to deliver even more value to their respective universities. Development of Enterprise Edition began pre-acquisition and continued post-acquisition. It introduced new functionality to the student accommodation system like mobile features to manage student arrivals on campus. Meanwhile, a new Student Life module focuses on connecting the dots around student well-being. It helps support positive mental health outcomes for students by enabling University leaders to monitor progress and make informed decisions about interventions.

For David, as a co-founder of Occam, offering his customers new features and solutions that make a meaningful impact for them and their organizations has been rewarding. And he doesn’t take for granted what it has meant for his team who have been able to take more risks and build out more new products than they would have before joining a Volaris-owned business.

It’s been a busy three years, for David Wilkes and the Occam team as they’ve integrated into Volaris-owned Kinetic. Over the next three years, what David says he is looking forward to most is bringing their solutions to new markets. “It’s really exciting,” he said. “Pre-acquisition we had reached a plateau and now we continue to grow in new and exciting ways.”

But David doesn’t look forward without also looking back. He shared this story: “We were hosting a celebration for our help desk manager’s 20th anniversary with the company. As we prepared, one of our customers told us that he’d been instrumental to her career and that she wouldn’t have ‘made it’ without the support he provided when she first started. That he supported her through some really though times when she didn’t know what she was doing and really needed the help.”

"You get hung up on the whole process of everything - numbers, targets, ratios, quarterly meetings. It's rewarding to be reminded that people are at the heart of it all and you really make a difference."

Get the latest updates about Volaris delivered to your inbox.